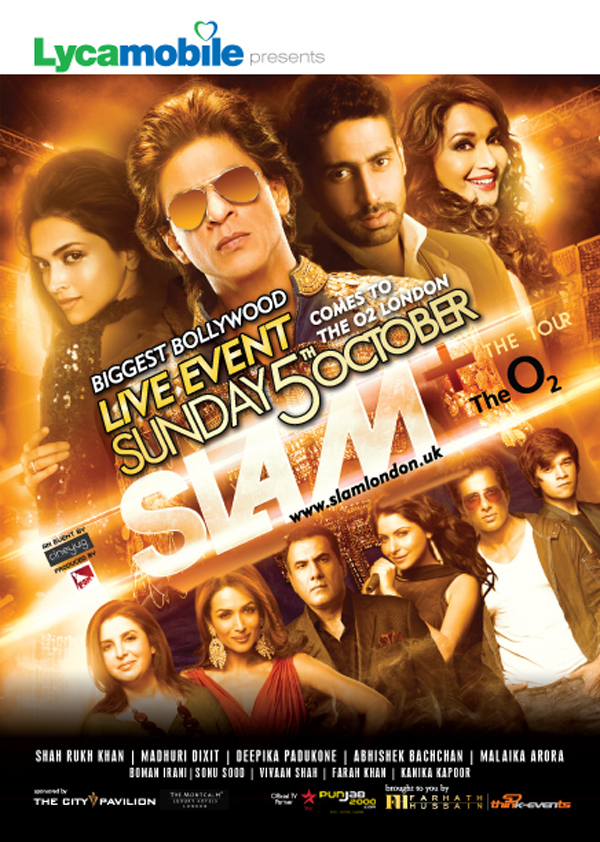 Lycamobile, the largest global provider of low-cost international mobile calls, has announced its exclusive partnership with the ultimate Bollywood event of the century, Slam+ The Tour as the event’s Title Sponsor, coming to The O2 London on Sunday 5th October 2014.

SLAM+ The Tour will be the biggest concert extravaganza of its kind in Europe, bringing a total of 135 cast and crew from India, including the second highest paid actor in the world, Shah Rukh Khan, who takes to the London stage for the first time in over a decade. A one-night-only experience, with a sell-out audience of 15,000 expected to attend, SLAM+ The Tour promises to be a night of wonder with a feast of big star names, riveting music and alluring dance sequences all interspersed with breathtaking visuals and impressive staging.

Joining King Khan will be a bevvy of Bollywood A-list actors, actresses, directors and choreographers, who promise to entertain like never before, including the reigning queen of the Indian film industry Deepika Padukone along with Abhishek Bachchan, Sonu Sood, Boman Irani, director Farah Khan, and newcomer Vivaan Shah. As a special treat for the audience, event organisers Farhath Hussain and Think Events will exclusively bring to UK shores the legendary actress Madhuri Dixit, who will join the stellar line-up to SLAM her way into the hearts of her fans. Bollywood’s dance diva Malaika Arora along with singing sensation Kanika Kapoor will perform to the latest floor-fillers to set pulses racing. The show will be expertly choreographed by Geeta Kapoor (Dance India Dance).

The high-profile synergy will further strengthen Lycamobile’s position as a leading global trendsetter at the forefront for promoting and supporting world class events, the entertainment fraternity and industry firsts. The tie-up also marks Lycamobile’s foray into the media remit with the launch of Lycamedia and radio networks Lyca Radio 1458 and Lyca Dilse 1035.

Speaking about the partnership, Lycamobile Chairman, Subaskaran Allirajah said: “We are delighted to partner with such a high-profile event as the Lycamobile Slam+ The Tour concert. It once again demonstrates our commitment to engaging with Indian communities across the UK by welcoming back to London arguably Bollywood’s finest living actor.”

SLAM+ The Tour is co-promoted by Farhath Hussain, responsible for bringing to the UK some of the most spectacular live events ever seen, and Keven of Think Events. Farhath Hussain & Keven of Think Events said about the partnership with Lycamobile: ‘We are delighted to be partnering with such a world-renowned brand as Lycamobile for this amazing, once-in-a-lifetime show that will showcase Bollywood’s finest performers on one stage at the iconic O2 in London. Lycamobile perfectly embodies the vision, philosophy and quality of service that we promote when it comes to organising, staging and producing world-class shows and events. We feel this collaboration is a perfect synergy of two international brands coming together to produce a thrilling, sell-out show.’

Speaking about SLAM+ The Tour and his return to the UK stage, international megastar Shah Rukh Khan says: ‘I am blessed to get a lot of love and support from people around the world. This is our way of giving this love back and thanking you all. I am super excited and looking forward to being in your city along with my colleagues Farah, Deepika, Madhuri, Malaika, Abhishek, Boman, Sonu, Vivaan and Kanika. We promise you an evening of love, laughter and entertainment.”