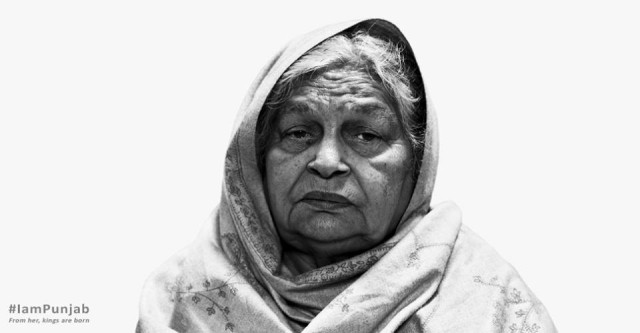 Kulwant Kaur frantically searched for her husband; the military had taken bodies away for mass cremation. She was left distraught and heartbroken. Kulwant never had the opportunity to say goodbye or give her husband a funeral according to Sikh custom.

With no family of her own she sought refuge with her husbands family. During this period Kulwant Kaur suffered from ill health and as well as breaking both of her arms in an accident.

Kulwant made a conscious decision to work hard and support her wider family who gave her a home. To this day she lives with her wider family and acts as a guardian to her families children. Khalsa Aid also continues to support Kulwant Kaur.

She speaks of how her father taught her Gurbani (Sikh Teachings) and how she draws inspiration from her faith. “I have always kept faith in the Almighty, this has given me the strength to get through some very hard times. (Kulwant Kaur, March 2015)

As the world commemorates INTERNATIONAL WOMEN’S DAY, Khalsa Aid is dedicating the next week to highlight the plight of Punjab’s forgotten mothers and widows. They suffered great physical and emotional hardships but these spirited women remained defiant in the face of adversity. Over the next 7 days we will showcase the story of those courageous women who lost their entire families as security forces resorted to unlawful, indiscriminate arrests, torture and extrajudicial executions.

The stories highlight their pain, sorrow and continued hardship but their iron-like resolve to righteousness and honour. For centuries, the women of a Punjab have been the backbone of the region. #iamPunjab is a commemoration of their strength and resolve. Khalsa Aid continues to remember and support these women in their time of need. Will you?