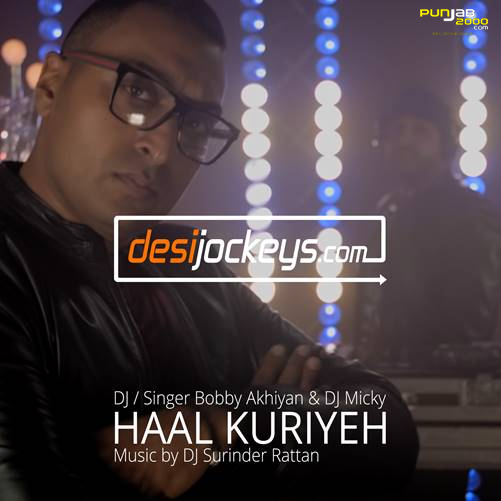 DJ and Singer, Bobby Akhiyan released his third solo single Haal Kuriyeh Ft’ing the music maestro DJ Surinder Rattan.
Bobby, raised in Manchester has been DJing since the age of 15 with his roadshow Desi Jockeys. He fast became one of the most reputable Bollywood and Bhangra DJ’s across UK and Europe accompanied by DJ Micky. Bobby also a Punjabi Pop Singer first performed on stage at the age of 4 where he sang the hit song “Vadeya Sharabia Ve” by Gurdas Maan. Bobby began his professional singing career in 2001 with “Akhiyan Akhiyan” which became very popular and still loved today. He was inspired by legends such as Surinder Shinda, Kuldeep Manak, Gurdas Maan but also some of the more modern singers and musicians from the UK Bhangra including Shin DCS, Sahotas, B21 and Achanak.
Bobby released hit single “Akhiyan Akhiyan” feat, Intenso, “Inspiration” album where music videos were shot in Mauritius, featured on “Sweet & Sexy” and “Lovin It” albums and the latest one being the single “Thenu Thakia” which reached over a million views on its YouTube produced by Rishi Rich and released on the Moviebox Record Label in 2012.
Desi Jockeys teamed up with music producers, Surinder Rattan, Jeeti and Vee to deliver this project which includes a mix of dance floor bangers and unplugged music including a brand new version of “Thenu Thakia” which are due to be released in the near future.
Desi Jockeys collaborated with Studio 5/Box Media who came together to create a signature shabby chic, boutique hybrid live lounge set for the music videos, creating a fresh new concept to bring UK Bhangra videos in line with the mainstream industry.
This project is unique as Bobby Akhiyan is not only a DJ but also a Singer, Songwriter, Composer and Music Producer.