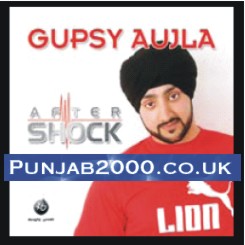 After Gupsy Aujla’s breathtaking debut album ‘Out of Nowhere’, we are proud to announce his second album entitled ‘AfterShock’.  It has taken nearly 2 years but after listening to this stunning 11 track album I’m sure everyone will agree it’s been well worth the wait.

The album features many of the singers from Gupsy’s debut album, including: Bhagwant Pawar with the song ‘Dil Chaiyda’, destined to become one of this summers biggest Bhangra anthems, the well known singer Angrez Ali, Jaswinder Patti and Goga Takhar – singer of the hit drum & bass track ‘Karpana’, which we are very proud to announce reached number 1 on the Bobby & Nihal show on Radio 1.

Xplosive Soundz is also proud and excited to present a new and without a doubt, up and coming singer by the name of Jaswinder Daghamia.  With a unique soulful voice to captivate all audiences, regardless of age or sex he brings a fresh sound to this awesome album.  We are confident that once you hear his voice, you will look forward to hearing his solo album which is currently being produced by Gupsy himself.

At the age of twenty-five, Gupsy Aujla is one of the ever growing producers of the Bhangra Scene.  He is a talented dhol, tabla and keyboard player and ingeniously uses his creative and innovative style to fuse sounds and cross borders. ‘AfterShock’ contains influences from Brazilian samba, orchestral sounds and traditional desi instruments mixed with contemporary western music.