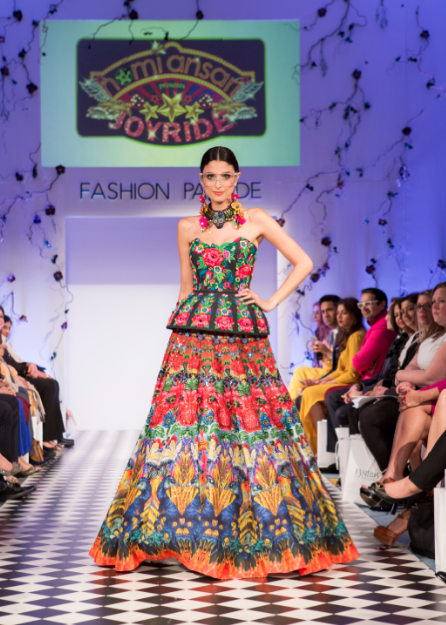 Held at the luxuriant Mandarin Oriental Hotel in Knightsbridge, Fashion Parade was founded by Sadia Siddiqui, CEO at Mustang Productions, as a platform for South Asian designers to showcase their couture to a British audience. She says: “I am delighted by the response we received from Fashion Parade. I feel it’s a defining moment for Pakistan, as last night we celebrated Pakistani culture at its best, and our guests, designers and also the media have all been so supportive.

“I feel with Fashion Parade, we are shifting perceptions of Pakistan; after all, this is a country rich in art, culture and heritage. Pakistan’s fashion industry is so vibrant and the collections showcased at Fashion Parade took flavours of the East and mixed them with Western influences, which worked incredibly well. I’m very proud of our designers and of Mustang Productions for highlighting the best in Pakistani fashion.”

Models walked down the runway in elaborate floral settings designed and created by award-winning florist Zita Elze. The hair and make-up was provided by dynamic duo, Aamir Naveed and Ambreen. This year, the vibrant event was fashion with a cause, supporting the charity Save The Children.

Fashion Parade was launched in 2013, in association with Ammara Hikmat of Encyclomedia PR, in London’s Asia House. Since then the event has been held at Kensington Palace and The Saatchi Gallery, setting the bar for luxury South Asian fashion events.