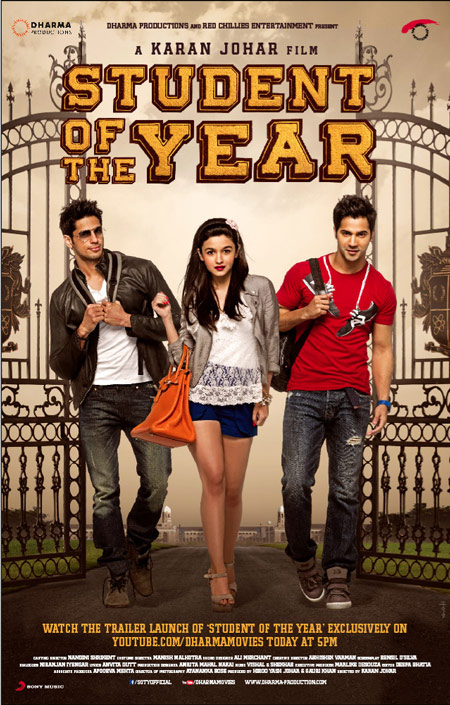 Jassi from Punjab2000 interviews the cast of Dharma Productions “Student Of The Year” Sidhart Malhotra, Varun Dhawan & Alia Bhatt all 3 make their debut under Karan Johar.

How different was the school you grew up from to the one you walked into in this film?

SIDHARTH MALHOTRA – I never went to a school like this, never had the privileges, and certainly didn’t dress this way. The image in the film is not me in my school times. The story concept never happened with me in my school times, competition, drama, friendship battle.

VARUN DHAWAN – I for sure had a much more of an imagination whilst in a school which certainly never was as close to this. I dreamt a lot in class, sitting at the back and daydreaming about music and dancing around colours and it was a very Bollywood like theme in my mind but not in reality unfortunately.

ALIA BHATT – For me, I finished with school and then started filming for this movie that brought back flashbacks and basically took me down to the memory lane. Some of the scenes in the film were the kind of things I did in school whilst in class but majority of it is all classy and glamorous in the film so it was something different, more of a fantasy really. But this entire fashion change came from this film definitely was not like this when I was in school. 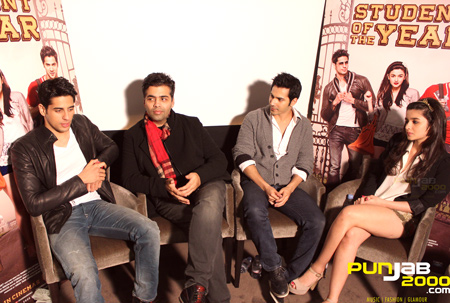 What difficulties did you experience when filming for Student Of The Year?

Sidharth Malhotra – We had to do a lot of rehearsals, a lot of singing and dancing and I don’t consider myself as a dancer so a lot of effort went in. I learned as we started to shoot, every song helped me learn something new whether it was a dance step or expressing myself on camera through the songs. Secondly, a lot of sports are involved in this film, we have triathlon, running, swimming, cycling and football actually. We trained a lot, had Rob Miller flown down from America, a sports director who choreographed all of this. A lot of physical training and of course Karan Johar’s acting classes.

Varun Dhawan – Similarly what Sidharth said, some days I felt were really easy and other days were like the toughest days of my life. We shot in Bangkok where it was over 40 degrees, shooting in the heat was really difficult. We shot in Kashmir where it was really cold, stuttering and stammering, so just getting the grip over where we were shooting, making it seem natural was difficult.

Alia Bhatt – The whole experience was all a learning experience. One issue I had all the time was getting ill, or injured during the schedule, I had to shoot and dance with a broken leg so that was painful

Karan, taking on 3 new talents, how was your experience? Were there times when you had to shout at them to get things down or were they fixed to their tasks all the time? I think I was more nervous than them because I had to show the responsibility of delivering on so many young star. It was initially a very nerve-wrecking for me because I knew I had to make sure I present them in the best way as possible. I kind of enjoyed playing the teacher and guide of these students, and then I started believing that they are movie stars and that they will always be.

Alia, you come from a family that are mostly all working and associate themselves with Bollywood and film making, so was acting always the first choice of a career? If so then did family have an influence in that decision? Yeah acting was always my first choice but it wasn’t because of them, it was just something I always wanted to. If they did have a problem with it then it won’t matter, this is always my choice but they always supported me.

Varun, I read that you wanted to become a wrestler before acting came about, is that true? It was something that I saw as a kid, fan of The Rock who now is a movie star. Was a very big fan of him and still am, because of him at a young age I wanted to become a wrestler, just a little phase, which got over when my mother slapped me and then I decided I want to be an actor.

Sidharth, was acting the first choice when you were in school? No actually I never thought about acting, it started off with modelling. Auditioned for an agency and got a role in a film which is why I came to Mumbai. Acting career was really recent for me and I am really thankfully to be able to land this film.

How did your parents and friends take on the fact that you all were on your way to work in a big film by Karan Johar?

ALIA BHATT – My family were really excited, my father was relieved about the burden of being forced to launching me if this never happened and my friends were very excited, they would wish me all the time so their luck is there with me.

SIDHARTH MALHOTRA – Mines were very happy and supportive, even if a small picture of me come through the newspaper, they’d be so happy, mum will call up her friends telling them she is so proud of me.

VARUN DHAWAN – They were as much shocked as I was. No one believed me, I told my friends that I got my first film and Karan Johar is the director, they said to me shut up, don’t talk rubbish. One of my best friends didn’t believe me for a day and my parents told him it all and he realised it is the truth.

Karan Johar, from the trailers we know it is a student based film, do parents have a role in the film, do they have a bearing on the students? There is definitely, a very strong presence of parents in the narrative. Without revealing too much, there is a strong angle about parenting influence, about the impact of father and son relationships and there is certainly a perspective in the film. Obviously if you are talking about students in the film, you can’t ignore the fact that how parents mould the children and how upbringing is the most important part of actually modelling the mental make up of a human being. I believe that the way we have addressed it is not only real but also if I may say a tad unusual. 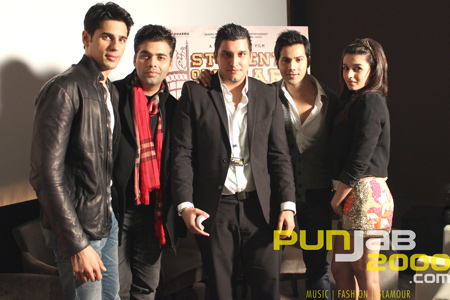