What is Domestic Violence? Is this a mental health issue? Is emotional trauma considered domestic violence? All these unanswered questions.

Domestic violence is rarely spoken about within the Asian community due to the stigma attached and judgemental environment we live in. Individuals who suffer from domestic violence can keep their abuse hidden from family, friends and loved ones for many reasons but one thing always stands out is ‘REPUTATION’.

Official statistics show the number of incidents of domestic abuse recorded by the authorities every year. However, the problem is much bigger than shown in official statistics, as many victims do not tell anyone about the abuse, therefore there are many unreported cases of Domestic Violence.

There are a number of reasons why persons do not report this abuse to the authorities and these are not limited to the examples we state: feeling isolated, reputation, cannot live without the other half and even not knowing that they are actually suffering from Domestic Violence.

Baljit’s audience is not just the Asian community and not just adults she states that domestic violence starts from a very early age at just 16 years of age when individuals are just finding themselves.

“Hi I Am Baljit Dlay, I use the PSUDENOYM; GhostWriter. I wrote the Piece; Wo/Men & PowerRRR, A Gender Nuetral Piece in Domestic Violence. I write short stories in Equality/Gender Nuetral. I see, Man & Woman as Equality. Women Break Silence, whereas Men are painted with an image of being Masculine. I wrote the Piece to Inspire, Encourage & to find PowerRRR with Strength to Voice against Bullies. There is help out there for both Genders. Men should equally break silence against ones’ abuse. Men have this, ideology nobody would believe them. I Create Awareness amongst Communities using Social Media. I offer voluntary Support reach, to those who are Suffering or Suffered by the hands of a perpetrator.

The impact Domestic Violence has on ones Well-being is beyond My description.  Mental Health is described as a Stigmata of Crazy. In My you will learn ones’ effects of Post-Traumatic Stress Disorder from the hands of perpetrator, yet A Battle of Survival.

I Dedicate this short story to the Forthcoming Generation of Today & Tomorrow’s World.” 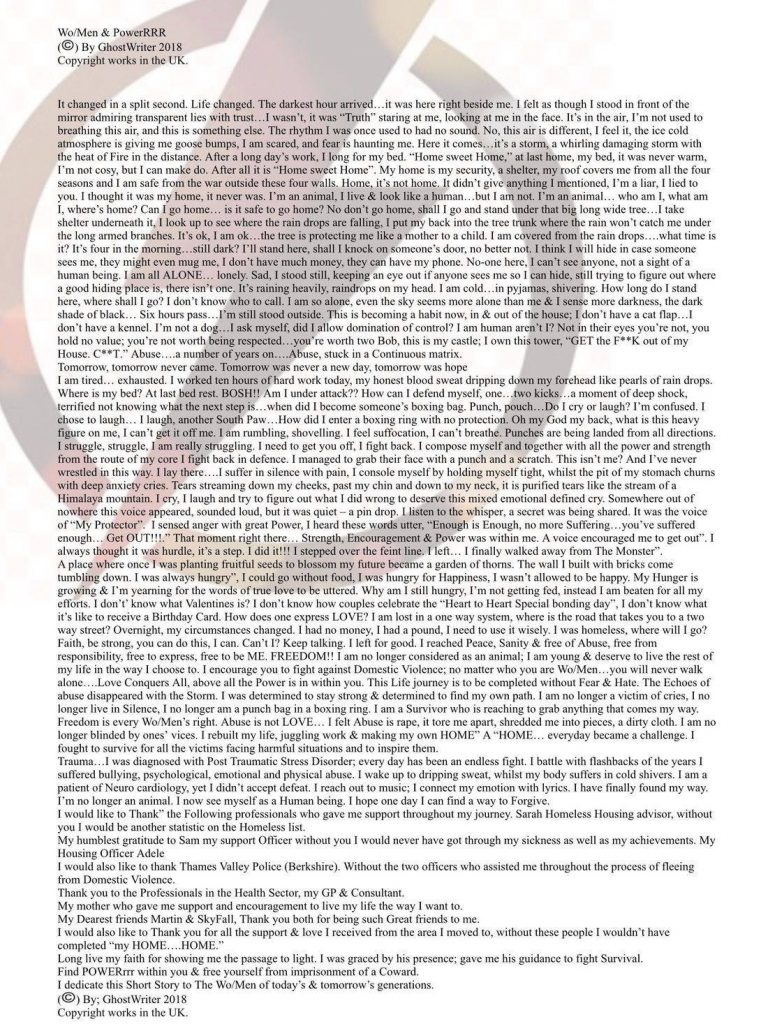