The power of Bhangra music is immense.  Throughout the decades its rich, vibrant, empowering energy has created waves around the world, captivating listeners across the globe.  The popularity of Bhangra is unquantifiable as there are a substantial amount of artists, listeners and fans who feel that it is an integral part of their lives.  However, there has to be someone who lives, breathes and functions for Bhangra.  Someone who has Bhangra running through their blood.  Someone who is the heart, spirit and embodiment of Bhangra.  That someone has got to be the one and only Dipps Bhamrah – the ultimate Bhangraholic!

Dipps Bhamrah, most commonly known for his iconic show on the BBC Asian Network, is undeniably the ultimate Bhangraholic.  He specialises in an array of areas which is evident through his work as a DJ, music producer and audio/visual producer.  He began his BBC Asian Network career via his work experience placement as a tea boy in 1995.  As well as having his own show, he was also involved in many radio programmes such as the Chart Show, Late Nights, Album Chart, Film Café, Sunday Soundtrack, Lunch, Bhangra Breakdown, The Bhangra All-Nighter, The Bollywood All-Nighter and Desi Decades.  He was also the BBC Asian Network’s 2005 tour official DJ and often presents shows on BritAsia.  He has become known on an international level which is reflected by his performances not only throughout the UK, but America, Australia, Austria, Canada, Malaysia, New Zealand, Norway, Singapore, Turkey and not to forget India, the country that conceived Bhangra.

Despite being multi-talented, interviewing the most legendary icons in the industry and being part of Apna Sangeet since the age of 15, Bhamrah’s unique trait that makes him stand out is his incomprehensible knowledge of the industry.  He has got to be the closest thing to the encyclopaedia of Bhangra!  His Sunday show is extremely engaging, entertaining and educational – something which is a rarity nowadays.  His genuine love, passion and enthusiasm for Bhangra can be felt when listening to his show and his humour and desi jokes reflects his happy persona and personality that listeners can resonate with.  This was something that radiated to the audience and I felt when he hosted the Punjab 2000 Tony Singh Pabla Tribute Charity Night.

Although he can be considered to be the god of Bhangra, he is not arrogant, pretentious or egotistical.  He always interviews his guests with respect, encourages listeners to engage with the show and is even willing to make himself look funny for charity.  This can be illustrated by the fact that he gave the public three options of what he was willing to do to raise money for Comic Relief in 2007 and let them vote: getting him to perform a Bhangra routine with a professional team, having a full bridal makeover or taking a Panjabi test.  Bhamrah also volunteered to stage manage, host and DJ at a Macmillan fundraising event in May 2015, took part in the ALS ice bucket challenge and has recently donated his time to collaborate with Dharam Seva Records. Bhamrah produced the music for the new My First Simran project – a melodious piece aiming to engage and connect young children with Sikhi.

Bhamrah is consistently bringing out new content and ideas on his radio show such as Dipps in the Mix, Behind the Bhangra, Tinn Cheejah and most revolutionary, Women in Bhangra.  The Women in Bhangra series showcased the female talent in the heavily male dominated industry, focusing on Mona Singh, Sarika Gill, Seetal Kaur and Sazia Judge.

Bhamrah dedicated the entirety of a show to the females in the Bhangra industry.  Clips from Bhamrah’s Women in Bhangra series are available online on the BBC Asian Network website

Due to the immense popularity, prevalence and predominance of Western music in society, it is a shame to say that many Panjabi youth don’t feel a connection with their culture, roots and heritage.  Some aren’t even aware of legends such as Surinder Shinda, Amar Chamkila, Kuldeep Manak, Surjit Bindrakhia or bands like Achanak, Alaap, Apna Sangeet, Azaad, Bhujangy, Heera, Pardesi, Premi and Safri Boys.  This is where Bhamrah has the power to revolutionise the industry due to his exceptional knowledge, expertise and experience of old school Bhangra and affiliation with new school artists – he is the glue that is holding two eras of Bhangra together.  Many times on his radio show Bhamrah has offered an invaluable opportunity to aspiring artists to showcase their talent and love for Bhangra music.  He is offering a ‘mainstream platform for creative & exciting future desi talents that the commercials & labels can pick up’.  It is very praiseworthy that he gave his listeners who want to pursue a career in the industry a chance to play their music on an ‘international radio platform on the most listened to Bhangra music show in the world’.  However, it is deeply saddening that ‘not one person emailed in and took the opportunity’.  This just goes to show that the future of Bhangra with regards to new artists isn’t looking bright if they are not willing to or don’t have the motivation to keep the essence of the industry truly alive. But as long as Bhamrah’s around there is still hope!

Bhamrah has interviewed most of the biggest stars in Bhangra including Diljit Dosanjh. Ranjit Bawa has appeared on Bhamrah’s radio show.  Bhamrah never fails to put a smile on his listeners’ faces

Make sure to tune into The Dipps Bhamrah Show on the BBC Asian Network every Sunday 6:00pm – 8:00pm for all the latest information about the Bhangra industry, pure Panjabi entertainment, world exclusives, interviews and some of the best old school and new school tracks! 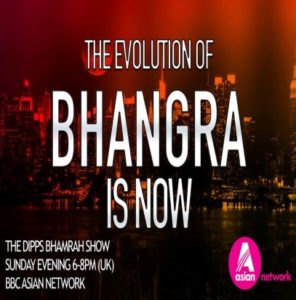 Tune into Bhamrah’s radio show on the BBC Asian Network

Bhamrah was part of the BBC Asian Network documentary For the Love of Bhangra, presented by Hardeep Kholi