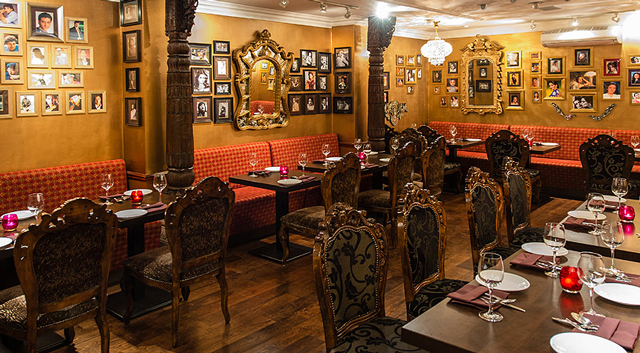 Inspired by the thieves market in India, Chor Bizarre, one of London’s iconic fine-dining restaurants serving authentic Indian cuisine is celebrating its 15th anniversary with a new Head Chef and a new menu. The restaurant has been refurbished and has now launched its new private dining area, the Bollywood Basement. To toast the centenary of the Indian Film Industry, Chor Bizarre has created this specially-designed decadent entertainment space. The room can accommodate up to 30 guests and can be booked for private parties and day-long conferences.

The Bollywood Basement is a ‘Bollywood-themed Party Room’ which oozes glamour in its Indian-cinema inspired decor. With jewel-like chandeliers and gold walls with opulent gilded frames and etched mirrors, this is the perfect Party Room to compliment Chor Bizarre’s eclectic menu. The Bollywood Basement is a passage into the world of Bollywood with walls dedicated to the greatest film icons. The much-loved faces of Hindi film heroes and heroines, villains, vamps and legendary romantic couples surround you. Along with the owner’s personal collection – most of the photographs of Indian Cinema icons are by legendary lensman, the late Gautam Rajadhyaksha.

The restaurant presents itself as an ideal location for fine-dining corporate events, full-day conferences, birthdays and other gatherings that require an extra glam quotient in a ‘Bollywood-bling’ surrounding. In addition to the Bollywood Basement, other spaces within Chor Bizarre can also be hired for exclusive and bespoke private dining, luncheon meetings, dinner parties and weekend events.

The iconic restaurant has teamed up with the award-winning Rhubarb Food Design (UK Caterer of the year 2011, www.rhubarb.net) to bring the very best cuisine, service and style to any special occasion. Chor Bizarre has partnered with Rhubarb for caterings at the V&A, Old Billingsgate and over 60 of Rhubarb’s other venues. The Chor Bizarre menu offers the entire pantheon of Indian cuisine, from Kashmir to Kerala. The restaurant can cater from small sit-down dinners to serving gourmet cuisine at large-events of up to 2000 guests. Chor Bizarre’s previous roll call of honour includes catering at the Cannes International Film Festival, The Ritz Paris and at the Conservative Friends event for UK Prime Minister David Cameron, amongst innumerable other events.

Located on Albemarle Street Mayfair, Chor Bizarre offers a distinctive ambience with imaginative flair. Inspired by the ‘Thieves Market’, a market unique to most ancient Indian cities, the whole restaurant is infused with distinctive and eye-catching décor. The gorgeous furnishings are a collector’s delight, sourced from the various bazaars of India and tastefully arranged to please the eye. Vintage furniture, antiques, innovative touches such as a canopied old-world four poster bed for seating, combined with old-world memorabilia and heritage fabrics, create an arresting landscape for an unforgettable meal.

It’s not surprising that Chor Bizarre, the London brand of New Delhi’s eternal favourite, has been adjudged ‘One of the 50 most romantic places in the world’ and included amongst ‘The Top 10 Restaurants in London for Fun and Atmosphere’ by The Independent, as well as ‘The Best North Indian Restaurant in the UK’ by The Cobra Good Curry Guide.