“[It is] probably that representation of a UK Asian who probably has gone through trouble in his life to be accepted in what he’s done ,  be it playing for an all white football team or just being accepted by his parents …and I believe that if anyone has to see this film it has to be a the UK Asian, and more so”.

However the filming of GOAL was marred by some racist experiences for John’s girlfriend Bipasha and his Goal co-star Arshad Warsi.

“When you’re coming to London and you’re shooting that’s the last thing you expect…You can’t generalise and you can’t say everyone is racist, definitely, because we met some wonderful people in UK.   We were shooting a scene outside and a car stopped by these two guys started rapping expletives.  Taking about brown skin and black skin and they just zoomed off. Bipasha and Arshad were stunned.  Bipasha said, ‘John it’s 2007 and these things shouldn’t be happening’”.

However his advice to young Asians in the UK remained calm,

“The only way to excel is not through rebellion, its not through extremism. It is through education…And it’s a long process, it’s a painful process, there’s a bleeding process..well..but someone has to do it”.

I’m not going to stand up and justify for her because we’re in a relationship and it’s about trust. We trust each other and that’s why we are still together and we’re pretty happy together.  We have our fights we’re both strong minded people if she says the sky is grey and I say it’s blue it’s always going to remain blue for me and grey for her. It’s NEVER going to change in our lifetimes…sometimes probably that rebellion that we share, or that strong head that we have could work against us at times”.

Obviously I support Bipasha….I’ll be honest and tell  you  Cristiano Ronaldo is a great guy, Bipasha speaks very highly of him.” 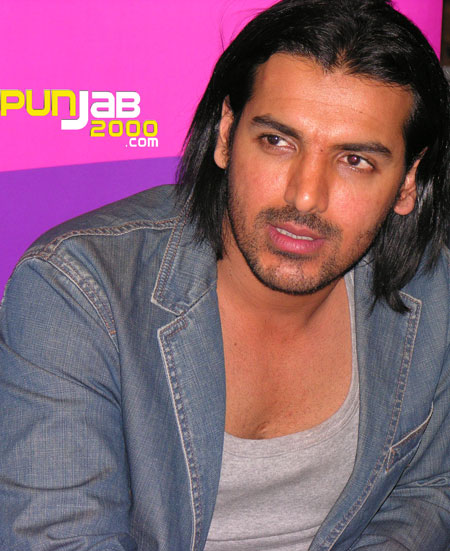 {mosimage}John said that the distress that was caused at the time along with both his parents being critically ill, only added to his method acting and helped him to feel depressed and recluse. John admits that his ‘extremist’ approach to method acting adds extra pressure  to the relationship.  He recently lost 27 lbs for a film role.

“That’s what Bipasha’s told me, even my parents tell me, especially my mom – ‘do you really need to get into the role so much? Because we’re afraid that you’ll kill yourself”.

Acclaimed film director Mahesh Bhatt also said of him “John you’re clinically on the edge because if you’re really pushing yourself to get into these roles you’ll probably get hurt”.

“I am a very difficult co-star to work with because I’m an extremist at work and if I get into a role I take it back home with me and she  [Bipasha]  can’t handle it so I don’t know how sometimes our relationship lasted so long”.

In reference to his last film ‘No Smoking’ which received a standing ovation at the Rome film festival  but was slated by critics in India,

“For no smoking – I said  ' if I was the audience would I watch this ?'  and I said ,  ' no , I wouldn’t watch this '. ...I made it very clear to my producers that this has to be a festival film.  But what happens that after a point commercial sets in…And they go and sell it for a huge commercial sum under the name of  John Abraham and it fails …But I stand by the film I think it’s a great film.”

The story is set during East India Company rule where a group of Sikhs sailed to the shores on British Columbia,  only to face fatal attack.  John says of the film,

“It’s the most inspiring story and it’s probably the darkest day in Canadian history a day that the Canadians are very embarrassed  about . In fact there was an official apology from the Canadian government at the time”.