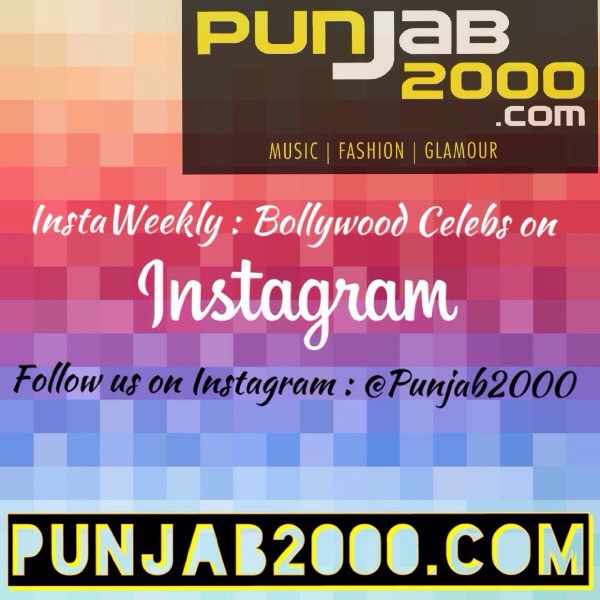 There’s no doubt that Instagram is one of the most popular social networking apps today. It has become very popular among fans and celebrities alike. First the Bollywood celebs took to Twitter to interact with fans and speak their minds and now Instagram. Be it spending an intimate moment with families or promoting their movies, our Bollywood stars have taken a liking to it. They share their everyday lives with their fans who show their love by liking and commenting on the pictures We, at Punjab2000, have decided to share all those pictures and what the celebs have been doing on Inatagram at one place every week for all our readers.

This week has been quite evenful for our stars. It’s been a combination of award functions, promotional events and weddings filled with glamour and glitz. While some stars were seen celebrating in this holiday season, some were seen promoting their films and shooting. Let’s have a look at what the stars did this week.

@varundvn Varun Dhawan posted this selfie with co-star Shraddha Kapoor from Las Vegas while filming for their upcoming movie, ABCD 2 which is being directed by choreographer Remo D’Souza.

@aliaabhatt Meanwhile, Aliaa Bhatt posted this picture with her co-star Shahid Kapoor from the movie Shaandaar.

@shahidkapoor Shahid Kapoor posted this picture of Aliaa Bhatt on the last day of their filming of title track of upcoming movie, Shaandaar.

@nargilove Well, it’s holiday season which we love and then there’s Nargis Fakhri who we absolutely adore. And this is when two things we love come together. Nargis Fakhri shared this picture for spreading some holiday cheer.

@arjunkapoor While some stars were celebrating festive season, Arjun Kapoor was hung high up in air. The daring and dashing actor shared this picture while rehearsing for his performance at the Big Star Entertainment Awards 2014. He is now a days very busy promoting his upcoming film, Tevar which co-stars Sonakshi Sinha with him.

@riteishdeshmukh So the Big Star Entertainment Awards 2014 took place yesterday And Riteish Deshmukh posted this selfie after winning the Best Actor in Thriller Movie award for his film, Ek Villian.

@jacquelinejf2 Jacqueline Fernandes also won an award at the Big Star Entertainment Awards 2014 and shared this picture on her Instagram account.

@sonalkapoor Style icon Sonam Kapoor shared this picture after giving the Stardust Award for Style Diva of the Year 2014 to Jacqueline Fernandes.

@priyankachopra Priyanka Chopra posted this picture with music director Shekhar from a wedding she attended.

Well, so this wraps up our InstaWeekly. Check out our InstaWeekly section every week to know what’s going on on your favourite celebrities’ Instagram accounts only on Punjab2000.com.