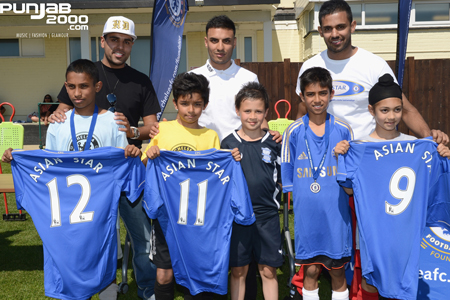 Nearly 400 children competed for a chance to win a year-long placement within the Chelsea FC Foundation’s Elite Training Centre.

Asian Star 2012 winners in four age groups from Under 9s to Under 12s were decided based on their performance, test results and the Foundation coaches' analysis following close scrutiny throughout the day.

In the Under 9s group Rajan Sahni stood out among all: 'I can't believe I won it. I'm really glad. I was really shocked when they called my name out; to beat so many people is brilliant.'

Meanwhile, in the Under 10s category, Keshveer Singh Lakhanjpaul triumphed: 'It's a brilliant feeling. I scored four goals in one of the matches, but it's a team game so my teammates deserve credit as well.'

Ibrahim Rahman won the Under 11s age group and said: 'It feels really good, I can't believe I won the competition. I've had a great day, my team did quite well but the best part was when I scored three goals in one game.'

In the oldest age group, Saidul Islam Khan was victorious and was almost lost for words. 'It feels amazing to win, there are so many people here so I'm proud of myself. The highlight of my day was winning the whole competition.'

Each winner was given a Chelsea shirt with Asian Star printed on the back and the number depicting their age group before being whisked away for interviews.

Parents watched under bright sunshine as their children took part in the event. There were also presentations by Chelsea FC Foundation coaches on the game, including healthy eating and training techniques. Pakistani international footballer Kashif Siddiqi also gave a presentation on Asians in football and the Zesh Rehman Foundation talked to parents about how to combat low Asian participation levels in the game.

The Asian Star initiative attracted the attentions of Bhangra singer Jaz Dhami, a coach himself, who said: 'This year I've seen a massive progression and I'm excited to be here. There are not any other clubs which put these events on and it gives the youngsters a great platform from which to build. I would like to see more of it, I've been involved over the past three years and I'm surprised other clubs where there is a big Asian population haven't followed suit.'

Professional footballer and Pakistan international Kashif Siddiqi added: 'It's a great initiative and I'm hoping a number of other clubs can now blueprint this model. What Chelsea are doing is not just great for young Asian footballers but the community as a whole. I've seen different kids from the various age groups shine and it's a brilliant idea. If I had something like this when I was growing up it would have eradicated a lot of the barriers I faced, so I'm very appreciative of what the club are doing.'

Simon Taylor, head of the Chelsea FC Foundation, said: 'It's been an absolutely fantastic day, the weather's been lovely, there's been a great atmosphere and we've seen some very talented footballers on show. The kids have loved it and so have the adults. This year we've engaged with the parents a lot more, there have been a few presentations which have been extremely well received so hopefully everybody involved has had a great day.'