And The Winners Of The 5th Annual Sikh Awards Are…

On Saturday 18th October 2014 PUNJAB2000 were privileged to attend annual Sikh Awards that took place at the prestigious Park Plaza Hotel, Westminster Bridge. The Sikh awards recognise and honour the outstanding achievements by individuals and organisations from the Sikh community from across the world. The hosts for the evening were the well-known DJ NEEV of Kiss FM and Kulveer Singh Ranger, adviser to Global cities.

This was the fifth successive year that the SIKH DIRECTORY presented the Sikh Awards, NAVDEEP SINGH BANSAL FOUNDER OF THE SIKH AWARDS STATES THE EVENT ‘PRESENTS A GREAT OPPORTUNITY TO MEET AND NETWORK WITH SIKHS FROM ALL BACKGROUNDS, INCLUDING THOSE FROM OTHER BUSINESSES, RESPECTED FIGURES OF ALL FAITHS, POLITICIANS, SCHOLARS AND COMMUNITY MEMBERS.’ 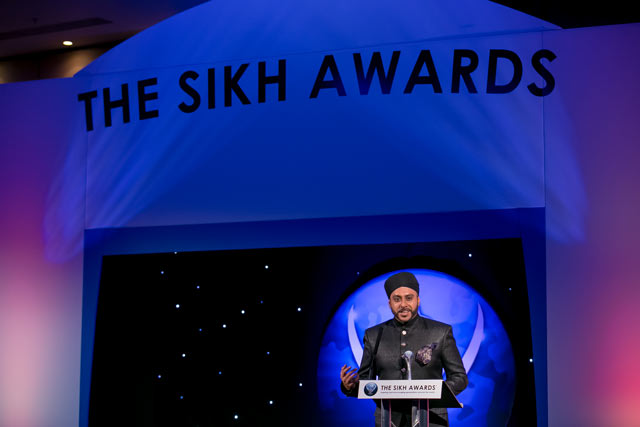 This year’s theme focused on the contribution Sikh soldiers made in the military, dating back to Queen Victoria’s era. Although the Sikh community makes up two per cent of the British Indian population, they formed 20 per cent of the British Indian Army, which saw 130,000 active Sikh soldiers. Consequently, the guest speakers at this year’s awards included representatives from the Royal Navy, Tower of London and the Royal army. There were many highlights of the evening including the exhibition ‘Warriors Saint’ about Sikhs participation in WWI.

The awards for the night were independently judged by five established individuals; Mr Andrew Harrison owner of Taller LLP, Mrs Rupy Singh investment and treasury professional of Punjab National bank, Mr Kamal Alam CEO of Argent Mayfair Holdings Ltd, Ms Sheila Singh CEO founder of London School of Academics and Mr Hardyal Singh Matharu leader of teams in the infrastructure sector in East Africa, India and the UK. There were eleven various categories to be awarded throughout the night. The ceremony started with one minutes silence for the fallen in the Great War, followed by a beautiful recital of the ‘Mool Mantra’ by Kuljit Kaur Bajaj & Harman Kaur Chawla.

The first award was for Sikhs in Charity, the nominees were Jasvinder Kaur Sanghera (UK) of Karma Nirvana, a national charity and dedicated helpline supporting victims and professionals seeking support in forced marriages and honour abuse. Giani Sukha Singh(UK) of Sikh Helpline who also founded Sikh Naujawan Academy and Dr.Amritpal Shergill (CANADA) of World Sikh Organisation, a non-profit organisation to promote and protect interests of Canadian Sikhs.
The winner of this category was Giani Sukha Singh of Sikh Helpline 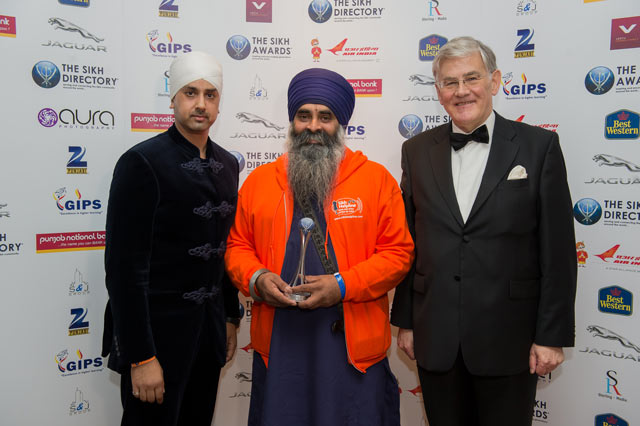 The second award was for Sikhs in Education, the nominees were Avtar Singh Mangat (UK) MBE the first turbaned Sikh headteacher who contributed vastly in the education sector and turning around a failing school to succeed and exceed national averages. Gursharan Kaur Kandra (CANADA) who set up the Canadian International Acafdemic Services Incorporation (CIAS) to help international students gain quality education in Canada. The globally recognised scholar, teacher, consultant and speaker Prof Mohanbir Singh Sawhney (USA).
The winner of this category was Gursharan Kaur Kandra. 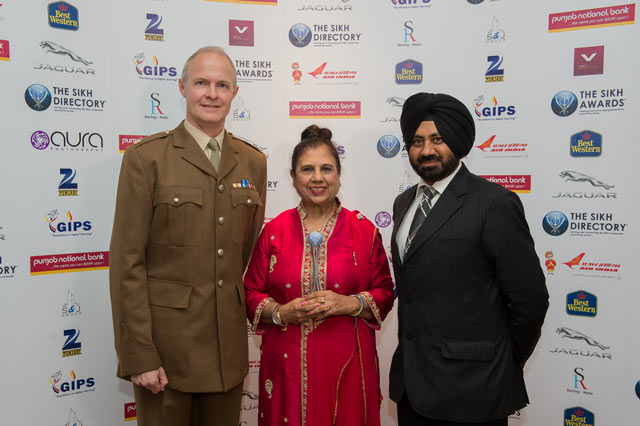 Thirdly, the award for Sikhs in Education, the nominees were Bhai Baldeep Singh (INDIA) the ‘renaissance man’ of Punjab. Dr.Harmeet Kaur(INDIA) a vocalist and artist in India and Snatam Kaur(USA) a new age artist who recently was on the pages of Oprahs ‘O’ magazine and performed for Oprah on her birthday. The winner of this category was Bhai Baldeep Singh.

The final two awards before the entertainment were for Sikhs in Media and Sikhs in Sport. The three nominees for the media category were Akaal channel (UK), Global Punjab TV (Canada), Sangat Television (UK). The winner was Sangat TV. 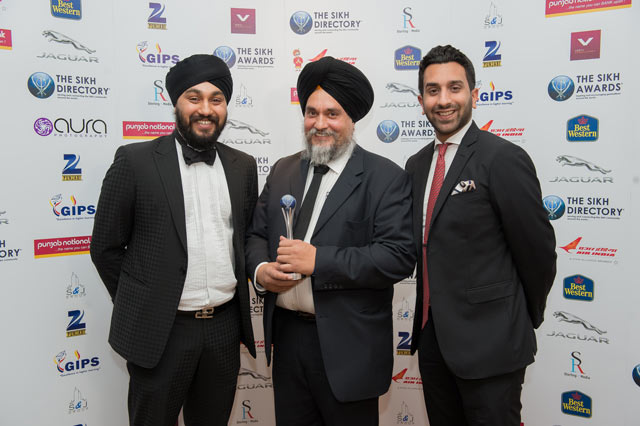 The nominees for the sports category were Darsh Singh of the USA, the first turbaned Sikh to play NCAA basketball. Mudhsuden Singh Panesar (Monty Panesar) and Navtej Singh from India is the world’s first Sikh bodybuilder. The winner for this category was Navtej Singh. 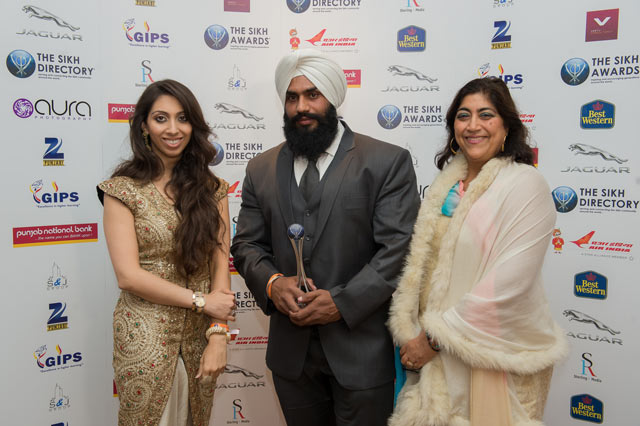 Masterclass Stringz and Thingz provided an interval for the awards ceremony. They are a duo that fusion the East and West together to showcase a performance for all to enjoy. Juggy Rihal a UK born Indian musician, composer, producer and teacher who has both been playing and studying Indian music for over twenty years. David Sheppard a trained flamenco guitarist who has over 30 years’ experience. 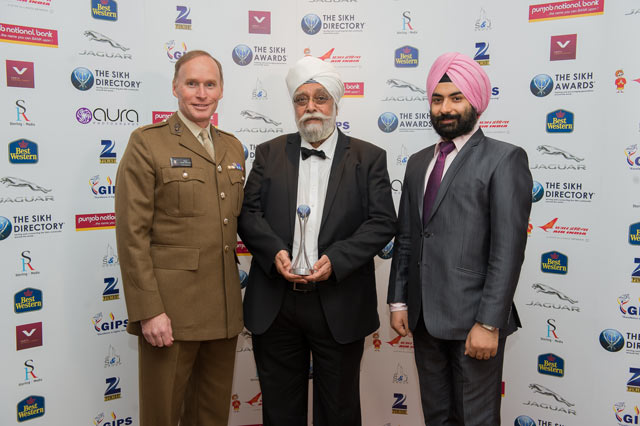 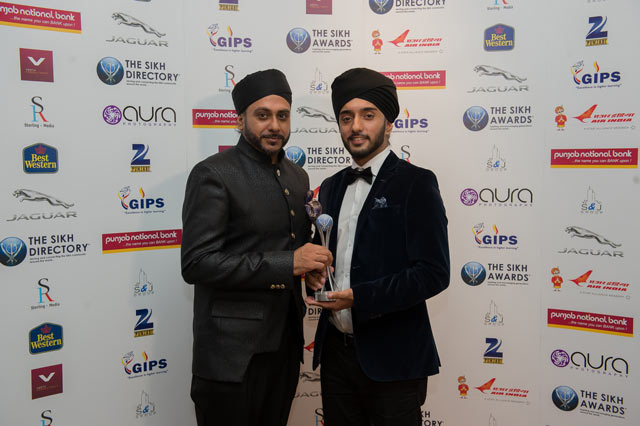 The Sikhs in Profession nominees were mainly international nominees consisting of Amrit Singh Uppal (Singapore), Joginder Singh (USA) and Rupinder Singh Sodhi (USA). All three nominees are well established in their profession but there can only one winner which was Amrit Singh Uppal the Global Head of South Asian Clients with EFG Bank AG. 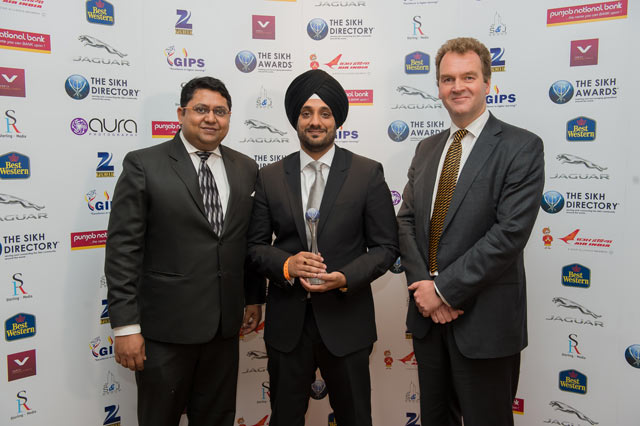 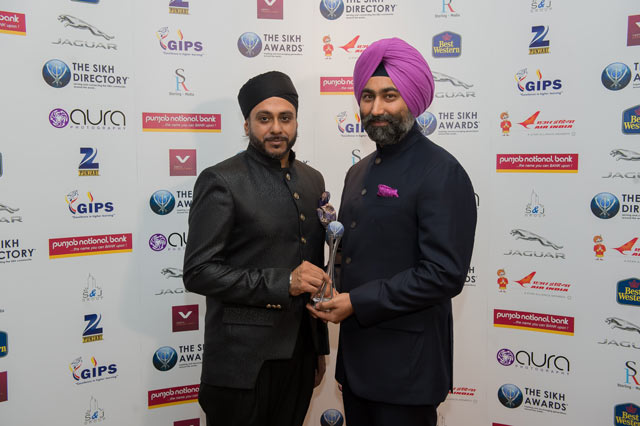 The three nominees for Business woman were Ms Mani Kholi (UK) of Khubsoorat collection, Mrs Parminder Kaur (Netherlands) a pharma regulatory professional and Ms Surinder Kaur (Kenya) Managing Director of Bushtrek Safaris. The winner for this category was Mrs Parminder Kaur who is also a speaker at International conferences of the Medical world.

Shortly followed were the second last category was awarded to Sikhs in Business, Entrepreneur. The nominees were Mr.Manpreet Singh (USA) founder of Talklocal and Desi Vibes, Mr Amarjit & Davinder Singh Bhachu (Kenya) of Bhachu Industries and Accurate Steel Mills. Mr Sukhi Singh Ghuman (UK), founder of Octavian Security and the first non USA citizen to join the HFSA Board of Directors. The winner for Sikhs in Business – Entrepreneur was Mr.Sukhi Singh Ghuman. 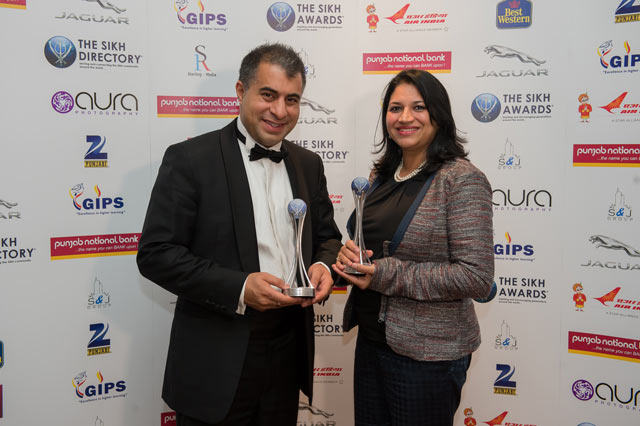 The final award was given to Sardar Tarlochan Singh MP (India) for the Sikh Lifetime Achievement. He is the only Sikh to have been the Chairman of National Minorities Commission, the Union Cabinet Minister. Not only has he contributed immensely to voicing Sikhism around the world, he has been the spirit behind getting the statues of Shaheed Bhagat Singh, Baba Kharak Singh, Mastar Tara Singh and Maharaja Ranjit Singh inside the Indian Parliament. If that was not enough he was credited for producing the first Sikh calender in 1973 and the first Sikh MP to have moved the bill in Parliament to amend Section 25 of the Indian constitution where Sikhs have been described as part of Hindus. 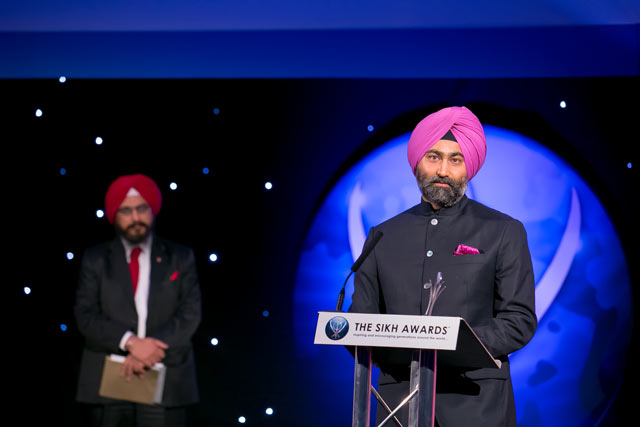 To finish off the event, there was a spectacular performance by the Baba Fateh Singh Gatka Akhara which was founded 20 years ago by Jathedar Uptej Singh. The moving performance by the group of women who used the chakar, Gatka sticks and dhal was both touching and dangerous. The English translation of Gatka, an ancient martial arts refers to sword fighting and is a battle technique commonly used by the Nihaang warrior which dates back to the 16th century.