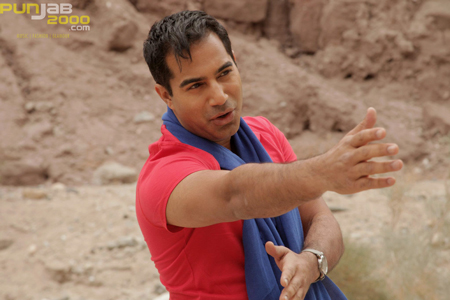 Acting was always secondary to singing – I started singing before acting but never professionally. I fell into acting and my first show was really a musical so it was a combination for Acting and singing. A lot of actors/singers do a play first and realize they have a passion for it in school. I was similar and I had a great mentor as a drama/english teacher which led me to audition for the National Youth Theatre.  Singing requires vocal talent and acting talent as you still need to perform but here you're using your voice as an instrument as well.

2.      Prior to leaving the UK you started in East enders tell us about this

I played a role in Eastenders – it was definitely fun and it centered around a scene at the queen vic pub. I met a lot of cool people on set and it was just a lot of fun, they were all very down to earth.

3.      Followed by the Bill did you ever get up to any mischief as a child

Well i got up to a lot of mischeif on the bill – it was an episode called "Catch the Cobra" and it was about getting back the crown jewels. One of the guys even swallowed some of the stones in order to hide them:) pretty hilarious. Here's a link from one of the earliest episodes i ever did and can see me in the background on 2mins-3mins.

4.      We have to ask you about your experience working for an American series was there much difference

The american's love their glitz and glamour and i certainly got mine for being a co-star which means having a role and having lines. Now they may not use them but I had to do a lot of improv for this. Also with NBC they have a lot of regulations and make you sign a TON of paperwork American's do however have a very different view of India and they love stereotypes more than the English so it can be very tacky but they love it in the US.

5.      We know the Americans love the British accent has that helped you in your career

"It has been rather fortuitous" (english accent). I had NO IDEA that it was loved so much – plus my accent was very strong and rather posh by UK standards and I can tell you that it works wonders in your career here. No wonder English people do so well here (of course they're very talented) but add the accent and you have a double whammy. For example i sometimes have no clue what i'm saying but I feel they're listening to my accent more than the content – annoying but use to your advantage

when I was 5 years old and my dad used to play old rafi songs and then i would sing them back to him or at a family party. I didn't sing publicly till i sang solo to an old age pensioners party to an audience of 100 when i was just 10 years old. We had to learn some pretty old songs I loved every second of it and i loved that the audience enjoyed and how happy it made them

Yes, I had private singing lessons in London and I also had singing and voice classes while at Drama School in CA.

Pariyon Ki Rani – I've had a long distance relationship before and it was special even due to the distance – i feel this is very much about anticipation, excitement and then a bitter sweet feeling when you part. Anyone can relate to it i feel, but for me personally it was about this particular moment in my life…

9.      How did you come up with the Video idea because it looks very international

I wanted to do something unconventional from what is being done in the UK. Sumeet is an exceptionally talented producer and I cannot sing "no pun intended" enough praises about him.  I wanted to encapsulate that in this song – I also wanted to have the girl be Indian and trust me in LA a lot of girls look Desi so i was very pleased when i met Richa as she was authentic and Desi! The idea of the desert came from the Guzarish song from Gajini – initially we wanted the beach location living in southern Cali but the feeling was that it was overdone. I wanted to have a Bollywood feel to it too and i definitely wanted it to appeal to everyone. One of our dancers is from Denmark and one from Italy and one from South America so its truly international. The desert we went to is past palm springs and one of the most gorgeous desert locations I have seen….

10.     You worked with the UKs leading music director was he your only choice

No he was THE choice. As i mentioned I was very picky who i worked with and i worked with a lot of "rogues" – people who would pull music from a bank of songs or did not have much creative talent or passion in my view. This is really important to me. Sumeet was already a leading figure in the Bhangra movement back in the 90's and so his creativity intrigued me and as soon as we met we knew we could collaborate really well. Hence he's been to LA a few times now and has produced some exceptional tracks as well as being the musical director for "Britains Got Bhangra".

11.     So tell us about the album which is your favourite track

Jeevan – I love singing this – i'm a romantic at heart and this song to me has the elements of love, passion and timelessness to make it a classic.

I'm going to answer that by saying CA. I've travelled around in the US and there are some places I'd rather not be over London. I love London in many ways as its home to me and its where my talent and learning flourished, however, the more I travel in California i realize how much beauty the pacific coastline has as well as the cities in it such as San Francisco, LA and San Diego to name just a few. There's a very good  reason why people who move here never move out….