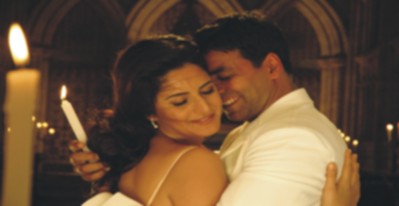 A Interview with Katrina Kaif

*Tell us something about your big release, Humko Deewana Kar Gaye…*

It's about a girl who goes trousseau shopping, and unexpectedly meets a guy
with whom she has an unexpected connection. Love is genuinely like that.
It's not something that you anticipate or expect. The twist in the film lies
in the fact that they are both engaged to other people. The movie then
progresses on to deal with different types of love… you have love out of
duty, you have love out of respect, love out of passion, and the choice one
finally makes between duty, respect and your heart. And there in lies the
beauty of the film. It's a romantic film, with slight elements of comedy.
It's neither a slapstick like *Maine Pyaar Kyun Kiya* or too serious like *
Sarkar.*

*The music of Humko Deewana Kar Gaye has become a big hit. What do you feel?
*

The film has lovely music and I'm glad it's doing well. It's at the top of
the charts.

*After Salman and Sushmita in your first film, how was your experience of
working Akshay Kumar and Bipasha Basu in Humko Deewana Kar Gaye?*

Bipasha and I didn't have many scenes together. But she's a stunner. Akshay
was very helpful. He made me feel extremely comfortable and helped a lot.
HDKG was a brilliant experience and I am awaiting its release. I learnt more
about cinema, filmmaking and the whole process.

*You are considered to be one of the beautiful faces in the Indian film
industry. What's beautiful to you?*

Beauty for me does not mean faces, because that's subjective. I find a face
beautiful, good looking, attractive, and all the terms you want to use, once
I know them. The vibes from a person physically changes the appearance of
the person for me. This may sound clichéd but it works for me. A technically
good-looking person will have not attraction for me if I find him or her
boring and dull. Beauty or attraction is more about the whole person, if you
know what I mean!

*Still, there must be a few names that come to your mind with beauty?*

Hmmm… Salma Hayek, I think, is very pretty, very natural. And although I
haven't met Madhuri Dixit in person, I find her very beautiful on screen. I
also find Manisha Koirala beautiful.

*How would you describe yourself?*

Moody… and a Cancerian to the boot. Even a small thing can change the entire
mood, but I'm working on that. Besides, I'm also loyal and possessive.

*Before coming to India from London and joining the film industry, what did
Indian films mean to you?*

Actually it wasn't much. I wasn't into it, and honestly, didn't feel the
need to watch them. And so there was so much to learn when I came here – the
expressions, the emotions. Since I didn't come with any preconceived notions
about the craft, I can give a new approach to whatever I do here. Come to
think of it, I was painfully shy as a child, totally into books and always
scoring A + in every subject. My mother always thought that I would end up
being a doctor or engineer, and was surprised to see me in the glamour
business.

*You debuted with a film in India, took to modelling and now are back in
films. Are you still unsure about where you want to be?*

No… that's just me. I am a free spirit. I didn't come here with films on my
mind, but I did one, and decided to cool off from that experience. I then
did modelling for two years with prestigious campaigns, and returned to
films when I was ready for them again. I got to do what I want to do when I
was in modelling and am doing what I want to do in films. It's as simple as
that.

*You avoid talking about Salman Khan. Why is that?*

We respect each other's privacy. I'm answerable to the media for my
professional life, not my personal life.

Fans are all the same. Internationally, they are more excited because the
Hindi film industry is so far away from them. They are all very sweet and
always respond positively. I hope they all watch *Humko Deewana Kar
Gaye*and like it. (Smiles).

(*Humko Deewana Kar Gaye *previews on April 13 in the UK with a full release
on April 14.